Where to Begin with Yakuza Cinema

Where to Begin with Yakuza Cinema

Where to Begin with Yakuza Movies

The yakuza film is one of the stalwart genres in Japanese film, going back to the pioneering days of silent cinema. Over the decades it has been reborn in numerous different guises, often functioning as a mirror of the dreams and nightmares of its time. Whether they paint the members of the Japanese underworld as snarling brutes, incorrigible cowards, or morally upright heroes, yakuza films can always be counted upon to deliver a cavalcade of vengeance-fuelled action, pinkie-chopping, complex gangland intrigue, and tattoos – lots and lots of tattoos.

One of the earliest examples of what could be regarded as a yakuza film is Daisuke Ito’s A Diary of Chuji’s Travels (1927), of which sadly only fragments survive. What we know of the story revolves around folk hero Chuji Kunisada, a yakuza boss travelling Edo-era Japan incognito, trying to stay out of the hands of the law while hoping to right the wrongs that have been done in his own clan during his absence. Director Ito was one of the pioneers of popular cinema in Japan, effectively creating the chanbaraor period actioner with his signature highly kinetic, fast-paced style and stories of heroic outlaws. 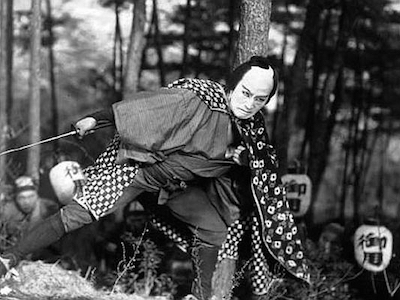 While gangster characters subsequently appeared in a wide variety of Japanese films, from Yasujiro Ozu’s Dragnet Girl (1933) to Akira Kurosawa’s Drunken Angel (1948), it would be halfway into the 1960s until the Toei studio created an actual yakuza genre. Dubbed ‘chivalry films’ (ninkyo eiga), they typically featured upright, honourable gangster heroes living by the underworld code and defending the weak, as representatives of the good old ways of Japanese tradition in a rapidly modernising turn-of-the-century Japan. It was no coincidence that the mid-60s emergence and peak popularity of the genre coincided with the reconstruction of Tokyo into a gleaming modern metropolis ready to welcome the Olympics and the technological marvel of the shinkansen bullet train. Red Peony Gambler from 1968, directed by Kosaku Yamashita, is among the more iconic productions in Toei’s hugely prolific output of that decade. Star Junko Fuji is the placid but deadly beauty who wanders the land as a card player, making alliances in film after film with her two male fellow icons of the genre, Ken Takakura and Koji Tsuruta. Takakura would later break into Hollywood, notably opposite Robert Mitchum in Sidney Pollack’s The Yakuza (1974) – a film co-written by Paul Schrader, who had clearly studied the Toei-style gang film in great detail: the same year he would deliver a hugely influential study of the genre in the pages of Film Comment magazine.

Though the yakuza film is synonymous in the popular imagination with the Toei studio, rival companies also dabbled generously in the genre. Nikkatsu delivered many, including several by the inimitable Seijun Suzuki, who would often mock the conventions of this and any other genre that passed through his hands. The Daiei studio was better known for its chanbara swordplay actioners, but it must be remembered that its most iconic character, the blind swordsman Zatoichi, is effectively a proto-yakuza: like Chuji Kunisada he is a member of the outcast class and wandering gambler in Edo-era Japan. Zatoichi actor Shintaro Katsu played an actual yakuza in another Daiei hit series built around his gruff persona: Hoodlum Soldier, directed by the great Yasuzo Masumura (of Red Angel and The Blind Beast fame), revolves around a gangster drafted to serve in the Imperial Japanese Army on the Manchurian front, who teams with a pacifist sergeant to hatch a string of insubordinate ploys meant to keep them away from the battlefield as long as possible.

The Shochiku studio may be better known for its genteel home dramas, it also had a little-seen “hidden face” as purveyor of populist fare throughout the 1960s and ’70s, including the odd yakuza film often made by directors on loan from other studios. One of the most lauded proponents of the Toei yakuza film, director Tai Kato, ironically made his best film at Shochiku. Released in 1966, By a Man’s Face Shall You Know Him is in some ways a predecessor to Kinji Fukasaku’s gangster films of the following decade, in that it places its tale of gang warfare in a context of ethnic tensions between zainichi Koreans and native Japanese mobsters in the immediate aftermath of defeat in World War II. Starring former real-life gangster Noboru Ando and future Tampopo director Juzo Itami, it is a film ripe for rediscovery.

In its own loopy way, Yakuza Law by Teruo Ishii represents another transitional point between the chivalrous gang films that had been its producer Toei’s bread and butter for the better part of the 1960s and the rough-and-ready ‘true account’ style of yakuza movie that would come to dominate the ’70s. As the final entry in Ishii’s ‘torture cycle’, it is an omnibus of three tales in which gang members stray from the underworld code, only to receive a violent comeuppance at the end. Each episode is set in a different era of Japanese history, with the final segment bringing the genre into the then-contemporary late 1960s. All that was left was for someone to drag the impeccably stylish but also rather staid yakuza film kicking and screaming through the grit of a new and far more ruthless decade. 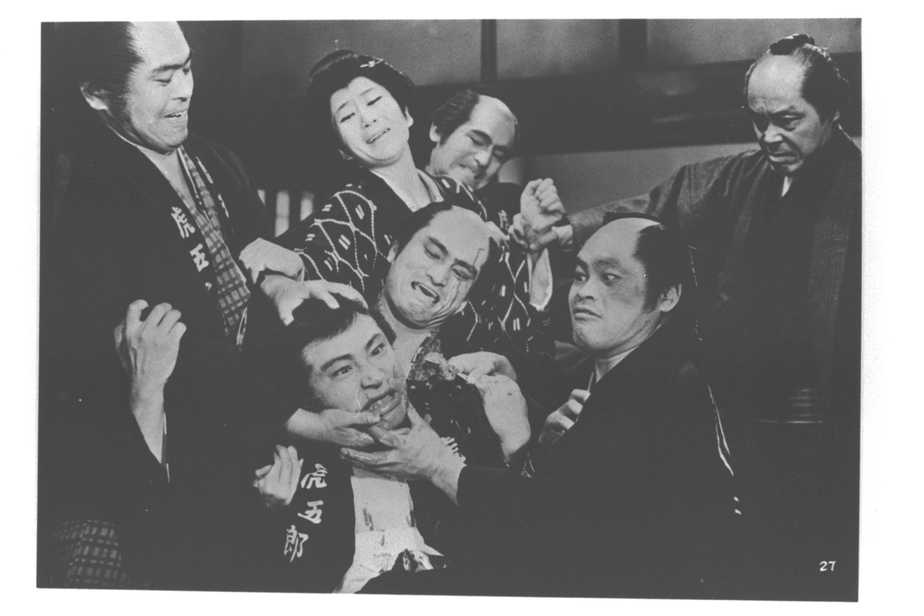 That someone would be Kinji Fukasaku, who had delivered a number of quite promising modern-day gang tales at the close of the 1960s, but who truly dynamited the genre with 1972’s Street Mobster and the following year’s Battles Without Honour and Humanity. In these, sneering young punks and battlefield returnees fight for survival in the urban slums and black markets of the late 1940s, banding together and growing into the modern-day yakuza organisations that will ride the lucrative waves of reconstruction and economic growth in the decades that follow. Literally plucked from the headlines, these ‘true account’ films saw Fukasaku experimenting with techniques borrowed from documentaries, Italian neo-realism and the French New Wave, all while telling his tales of rise and fall at a breakneck pace. The epoch-making success of Battles Without Honour and Humanity led to a five-film series, and the director spent a good part of the decade churning out a host of variations on the same themes and style, including Cops vs. Thugs and the ferocious Graveyard of Honour.

As the true-account style ran out of steam toward the end of the 1970s, the following decade saw a general shift in Japanese cinema toward catering to a female demographic. This move also, perhaps somewhat improbably, affected the yakuza film, which suffered from a drastically reduced output that nevertheless produced a handful of real gems aimed at this new audience. Among the notable yakuza titles of the 1980s, the long-running Yakuza Wivesseries from Toei ranks as the biggest success, while the independently made Ryuji, about the daily domestic travails of a married gang member, managed to garner a cult following that endures to this day. The blockbuster production Sailor Suit and Machine Gun is especially worth spotlighting, in that it combined the yakuza genre with the idol movie, as a high-school girl inherits a faltering yakuza gang after her aging oyabunfather passes away. Produced by the media-savvy Kadokawa Films, it offers a high-concept, crowd-pleasing tale that is directed by indie luminary Shinji Shomai in a highly unconventional one-scene-one-take style.

Coming at the tail end of a decade in which the yakuza film re-emerged as the go-to genre for Japan’s straight-to-video “V-Cinema” market, Takashi Miike’s Dead or Alive is perhaps the ultimate 1990s yakuza film. It embodies and indeed epitomizes both the fanciful excess and the keen social awareness that were the twin characteristics of the best of that decade’s output – while remaining resolutely idiosyncratic at the same time. In a move reportedly inspired by the Pacino-DeNiro pairing in Michael Mann’s Heat, it stars the two undisputed kings of V-Cinema, the eternally pompadoured Riki Takeuchi and the versatile Show Aikawa, the former as a Chinese-Japanese criminal spectacularly encroaching on yakuza turf and the latter as the cop with orders from the wrong bosses to take him down. Starting out with a blitzkrieg descent into the Tokyo underworld and capping off with, well, something best left unspoken if you haven’t seen it, it packs in everything from a decidedly dingy backroom porn shoot to an immortal and omniscient chef plying his trade in Yokohama’s Chinatown.

With the implosion of the video rental market in the 2000s, V-cinema went into a downward spiral of ever-dwindling budgets. Directors who had made their name in the genre during the 1990s either went onto bigger and better things (such as Miike’s move into family fare) or gave up on filmmaking entirely (such as Rokuro Mochizuki of Another Lonely Hitman and Onibi: The Fire Within fame, now a struggling stage director). The vacuum they left has yet to be filled, but since the avenues for amateur and indie filmmakers in Japan remain numerous – notably through events such as the Pia Film Festival and the Yubari Fantastic Film Festival – young fans of the genre have lately emerged with their own takes on the genre. Most of these are affectionate if derivative homages that exhibit their shoestring budgets, but Hiroshi Shoji’s Ken and Kazu went for a more intimate approach that channelled the best aspects of the aforementioned Ryuji and Takeshi Kitano’s Kids Return. Focusing on young people that have to make impactful life choices, it treats petty crime as a bullshit job like any other for a Japanese millennial – though coming face to face with the yakuza is perhaps not the best of prospects for those wishing to settle down and start a family.

Live by the law of the sword and start your Yakuza collection - with Yakuza Law!