“Puppets, Maxine. You see, it's the idea of being inside someone else's skin and seeing what they see and feeling what they feel.”

From Dead of Night to Puppet Master, marionettes have been used to explore humanity’s inner psyche in cinema since they could, well, walk. Why the fascination? What is it about them that expresses such dark preoccupations within ourselves? And what is it that we are more drawn to: the puppet – or the puppeteer?

With our remastered release of BEING JOHN MALKOVICH hitting Blu-ray shelves this month, we’ve teamed up for an interview with George Glover from London’s prestigious Curious School of Puppetry to delve into the inner world of puppeteering and how it’s explored in this cult gem from the 1990s. 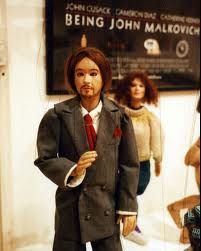 A: The ‘mirror image’ theme and idea of control is one of the most prevalent in the film – why would you say that puppetry is used to evoke that?

GG: From a general perspective a puppet is the perfect symbol for control over another person, you only need to look so far as a newspapers comic strip to find reference to public figures being manipulated by higher authorities pulling their strings.

In the case of the film however it’s a bedraggled wooden marionette that’s on stage, its strings being pulled from above by an uncannily similar bedraggled puppeteer, Craig. This wooden mirror image is forced to relive Craig’s anxious human experiences, but now, with a sympathetic dictator or god in charge, Craig can write the narrative he so desired for himself enacting it with his mirror image below. He’ll play this on a much bigger stage later, once in control puppeteering John Malkovich’s body and re- writing both of their lives.

GG: Yes, as both a puppeteer and an actor your aim is to guide an audience to believe that what they see is a reality. In puppetry, at its simplest, the audience will see an inanimate object coming to life, breathing, living and thinking; and at its best the audience will suspend their disbelief so far that they completely empathise and identify with this object as if it were a human being, and perhaps even see themselves reflected within in it. Within acting its surely very similar, except the actor uses the abilities of their own body rather than a puppet to create a believable character: their posture, the tone of their voice, the way they react, etc.

Within the film this actor/puppeteer conversation is perhaps loudest not when Craig is physically manipulating John Malkovich’s body like a puppet against Malkovich’s will, but actually when people (including Craig) visit Malkovich’s head to experience and feel what it’s like to be John Malkovich. For both puppetry and acting it’s not about forcing your will onto a character but inhabiting its internal space, understanding it from the inside, observing the character emanating from yourself or the puppet. The ‘real' Malkovich said about this element of the film: “I think it's about acting—opening the door into the mind of someone else, and how, escaping your own mind for 15 minutes, you see the beauty and fascination and eroticism even in the most boring things.” 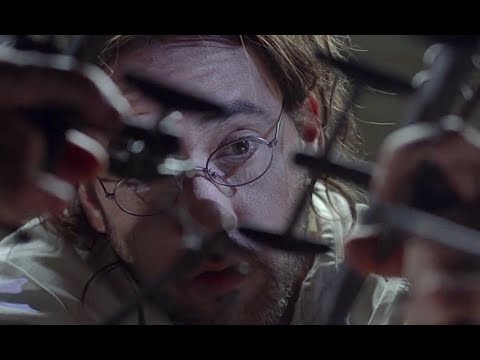 A: The film also uses puppetry to discuss the idea of ‘gaze’ and seeing the world through someone else’s eyes; is there an element of that within puppeteering?

GG: To an extent yes, you learn and build up an understanding of a character’s personality and then see how they would react to the world and situations with that different perspective to yours - much like an actor does with a character too. A puppeteer will send their own gaze through the rods or down the strings of a puppet to see through its eyes, what it looks at and how it feels about the world it inhabits.

GG: Unified, synchronised. After practicing professionally for many decades a puppeteer, through their physical practice, may lose a sense of themselves and can inhabit any object, figure or character. It may sound strange, but you can actually see this in more experienced puppeteers, when they pick up an object to puppeteer it immediately ‘comes to life’ effortlessly, your eyes shift focus from puppeteer solely to object/puppet as if a new consciousness just entered the room, it’s an uncanny sight.

Another aspect is that of role casting. A puppeteer can perform many roles that have no physical aspect similarity to themselves, gender, age, even animal roles as long as there is an understanding of character these physical ‘boundaries’ can be broken even more smoothly than for an actor. A puppeteer can also play many roles at once if technical skill allows. 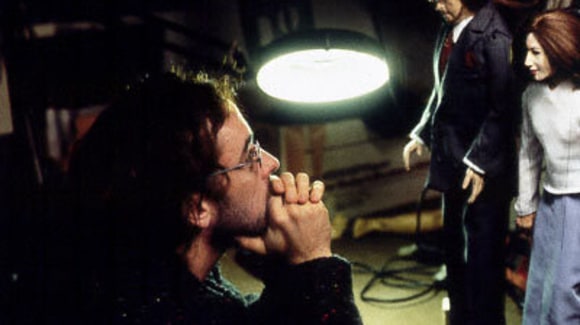 A: There is a strong element of ‘dance’ within the film as well; is it ever important to be able to replicate a marionette’s movements in your own body? How important is rhythm and coordination?

GG: It’s less important to replicate a marionette’s movements in your own body, but more important to replicate them correctly in the puppet by observing and studying movement from bodies, your own or others. We must study the way our bones and muscles work and how and where effort is used to achieve movement. The inspiration could be from a wide array: humans, animals, machinery, natural or manmade forms. It all helps to build a believable reality around the puppets character and strengthens the audience’s suspension of disbelief.

Of course, there are obvious unintentional movements which would break an audience’s suspension of disbelief: an elbow bending the wrong way, a head spinning 360 degrees or a jump bouncing too high, but once the human reality can be imitated precisely we can then transcend that and the puppet become superhuman - leaping higher, flying, etc.

One of the most important elements to consider is how movement can suggest other forces, primarily gravity but also for instance: under water, over ice, against wind and through rain, etc. these forces all affect the ways our bodies move through a space too.

Rhythm and coordination are essential to a puppeteer in performance, remembering and repeating movements into positions over and over again, the need to be technically accurate but also to feel constantly fresh and alive too. Furthermore, a large part of puppeteering is being in sync with other puppeteers on stage. There may often be two or more puppeteers to a single puppet, so working in unison to give the illusion that the puppet is one living whole, rather than many parts, is essential. Away from the puppet, if you were to watch a performance focused solely on the puppeteers you might see a rather strange dance unfold as they side-step to find space where they can, duck as props exit over their heads and rise up as a puppet comes onto stage, it too is choreographed just like the puppetry.

A: How would you describe Craig/John Malkovich’s style of puppetry in the film? Are there different forms of puppeteering?

GG: The sole type of puppet used in the film are String puppets otherwise known as Marionettes, unless you count Craig puppeteering John Malkovich, in which case he’s using a body puppet!

A: How would you describe the kinds of marionettes that are used in the film, and (what) why would you say they are?

GG: They are classic marionettes, however many of them have been designed for filming specific sequences. For instance, it would be near impossible to film the ‘Dance of Despair’ sequence with a single classically strung marionette - and completely impossible to perform it live on stage. The designer, maker and puppeteer Phillip Huber spent three weeks engineering and rehearsing this ‘action’ sequence discovering the different ways to attain specific movements from the stringed puppets. During the more complicated filming of an action sequence the puppet would be strung a certain way to perfectly achieve a particular movement for a shot that may only be 2-3 seconds long. Once that was captured satisfactorily Huber would then re-string the marionette for another specific movement in a new shot. Once all these shots were captured and edited together the whole seamless sequence would be created.

There is, apparently, one ‘cheat shot’ in the Dance of Despair sequence. In a particularly difficult shot they decided to record the sequence in reverse to achieve the desired movement. They did, and it worked, so much so that I have no idea which shot it is in the sequence.

A: Do you think that puppetry offers in the same way cinema does an escape into another world?

GG: Certainly, perhaps even more so as, like theatre, the suspension of disbelief is happening right before our very eyes. This other world is physically there in our time zone, existing in our own world like a tangible vase of flowers, and yet it’s life is totally evoked from our imagination. And that can make for a much more visceral experience than escaping through a screen.

A: Do you think that escape is as true for the puppeteers themselves as it is for the audience?

GG: That’s the aim, to be entirely focused, concentrated in the character and participating in its’ world.