In the wake of Olivier Assayas’s cult cyberthriller DEMONLOVER getting a restored Blu-ray release, Anne Billson looks at the history of the genre, and offers up a list of the best internet horror movies that’ll make you think twice before accepting those Cookies…

DEMONLOVER, written and directed by French auteur Olivier Assayas, is simultaneously cyberthriller, corporate satire and horror movie. Assayas's refusal to adhere to any one genre or traditional narrative structure antagonised some viewers; the film was heckled at its premiere at the 2002 Cannes Film Festival. But it's those very elements that made it both of its time, and ahead of it.

DEMONLOVER was at the vanguard of a new wave of 21st century horror movies that was starting to explore and exploit the medium's two most gamechanging technological advances of the 1990s: the rise of the internet as narrative fulcrum and marketing tool, and the increased availability of digital video, which opened up film-making to those without access to big budgets or expensive equipment.

Mainstream horror/SF movies of the 1990s, such as THE LAWNMOWER MAN, GHOST IN THE MACHINE or VIRTUOSITY envisaged the internet as a semi-abstract CGI zone in which deceased serial killers or psychoactively enhanced gardeners could run amok. Meanwhile, thrillers like DISCLOSURE (1994), THE NET (1995) and ENEMY OF THE STATE (1998) pointed to a new style of paranoia dealing with identity theft, surveillance and fake news, themes that would take on even more pertinence in the 21st century.

DEMONLOVER's middling budget, high-profile director and relatively starry cast (Connie Nielson, Chloë Sevigny, Gina Gershon) was far from typical of the cyberhorror of its era, though it shares with many of them its mapping of a protagonist's descent into the netherworld of the dark web. In DEMONLOVER, this is an S&M site called The Hellfire Club, specialising in the subjugation of women costumed as Wonder Woman, Lara Croft, Mrs. Peel and other symbols of female empowerment. Since horror films are invariably about sex and death (not necessarily in that order), the internet's endless supplies of porn and snuff (both authentic and fake) make it the perfect playground for the fears and desires that provide the genre with its motor. In films like STRANGELAND (written by and starring Dee Snider, lead singer/songwriter with the heavy metal band Twisted Sister), MEGAN IS MISSING (2011) or THE DEN (2013) the internet takes on the attributes of a menacing fairytale forest where credulous young women (and sometimes men) are lured, via chat rooms, into the clutches of sadistic predators. Spoiler: they usually end up tortured to death, unless they're played by better known actresses such as Nastassja Kinski in .COM FOR MURDER (2001), besieged by a psychopathic hacker who keeps quoting from Goethe's THE SORROWS OF YOUNG WERTHER, or Sasha Grey in Nacho Vigalondo's OPEN WINDOWS (2014), stalked by a hacker who threatens to kill her live on the internet.

At their most basic, straight-to-video exploitation such as BIGBROTHER.COM (2000) or WATCHUSDIE.COM (2001) riff on reality TV by sequestering scantily-clad chicks in a webcammed house, and then loosing psychokillers into their midst.  It's a crude update of a concept aired, as satire, more than three decades ago in the BBC's THE YEAR OF THE SEX OLYMPICS (1968), from a teleplay by Nigel Kneale that posits a near-future reality TV show in which a family's attempts to fend for itself on a Scottish island are perceived as too boring by TV executives, who plant a psychopath on their island to spice things up.

The idea of webcammed murder watched live by an unseen audience is essentially an internet twist on the old urban myth of 'snuff movies', as typified by the notorious (and blatantly fake) exploitation pic SNUFF (1975) and recycled as reputable drama in HARDCORE (1979) and 8MM (1999). In CRADLE OF FEAR (2001) a reporter becomes obsessed with a website offering 'fully interactive rape, torture... and murder,' and a range of menus from which to select weapons and target areas on the victim's body. 'Welcome to a paradise of depravity.'

FEED (2005), directed by Brett Leonard (also director of THE LAWNMOWER MAN and VIRTUOSITY), presents a punning variation in which a cop investigates live footage of a webmaster force-feeding obese women on a diet of calorific junk food while viewers place bets on how long the captive can survive. Like DEMONLOVER, MY LITTLE EYE (2003), HOSTEL PART II (2005) and LIVE FEED (2006) hint at an internet audience of shadowy capitalists betting on or paying to watch the torture and death of hapless victims. Sometimes, as happens in SENSELESS and UNTRACEABLE (both 2008), the torture is stepped up in response to soaring ratings, as casual net surfers (that's us, the audience!) pile on to watch the victims' suffering in real time.

Towards the end of the noughties, a proliferation of smartphones and social media led to internet horror changing to reflect the concerns of the day, with younger casts and less torture porn. In LIKE ME and TRAGEDY GIRLS (both 2017) bloggers and YouTubers commit murder to get more 'likes' for their media platforms. Cyberbullying became a recurrent theme; in CHATROOM (2010), the manipulative psycho is thwarted, but more often the bullied victims are driven to suicide, after which ghosts or relatives seek revenge by slaughtering the erstwhile tormenters. Hence PANIC BUTTON (2011), #HORROR (2015), DON'T HANG UP (2016) and ASSASSINATION NATION (2018), with supernatural variations in TORMENTED (2009), UNFRIENDED (2015) and FRIEND REQUEST (2016).

CAM (2018), in which a video sex chat girl finds her identity stolen by a doppelganger who gets more 'likes' than she did, and the cyber-thriller SEARCHING (2018), in which John Cho scours social media in a search for his missing daughter, show that the internet can still provide a fruitful genre framework. But DEMONLOVER looks as fresh as ever, one of the two masterpieces of 21st century cyberhorror. The other is KAIRO (2002), by Japanese director Kiyoshi Kurosawa, in which the internet is the portal through which ghosts contaminate the living with suicidal despair. What these two films have in common is a lingering malaise, with a sense that, horrible as torture sites and cyberbullying are, they're just the tip of the iceberg, and we have yet to look into the true dark heart of the internet. 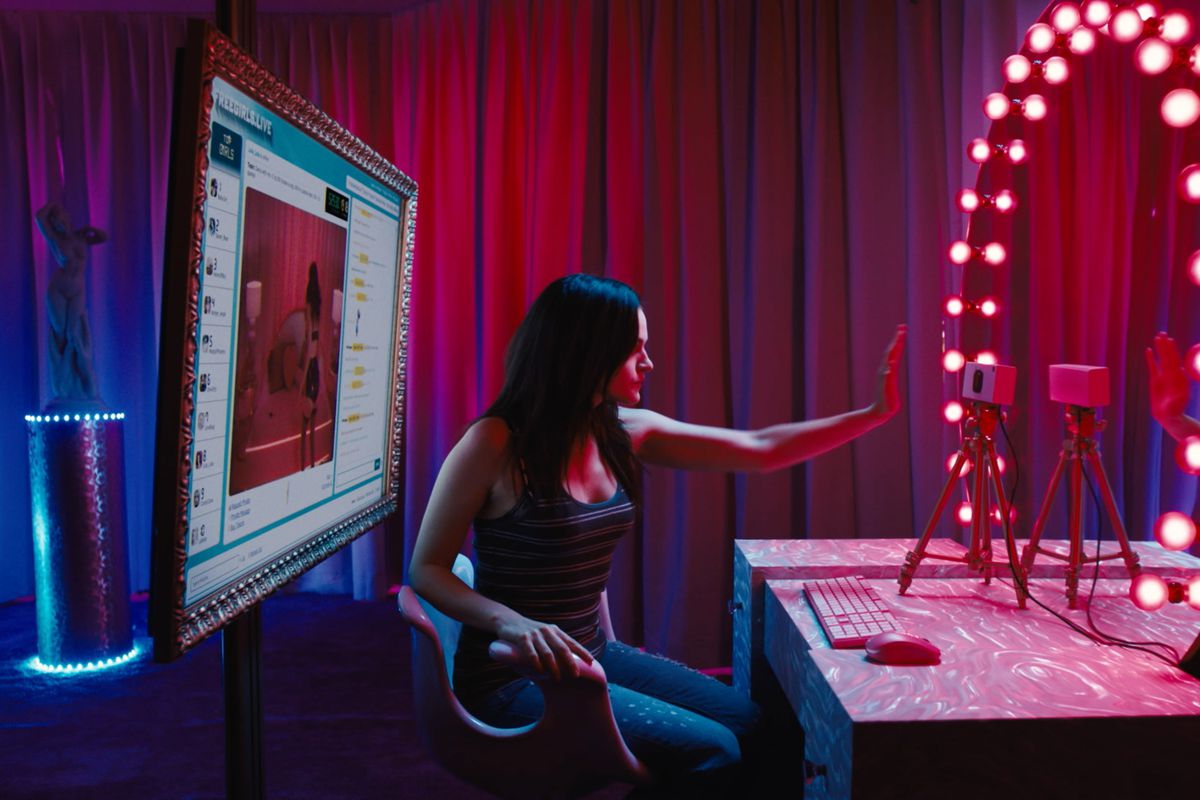