From Hammer Horror to Rocky Horror: Exploring the Films of The Oakley Court

From Hammer Horror to Rocky Horror: Exploring the Films of The Oakley Court

By Jake Roche and Rebecca Howard

When asked about the influence of The Oakley Court on film productions, Jacqueline Pearce, the star of such Hammer classics as The Plague of the Zombies and The Reptile, stated: "It was the atmosphere of the place which made it so unique. Oakley Court really provided a genuine tense atmosphere so crucial to the horror genre".

The location behind such enduring classics in the British cinema landscape as The Curse of Frankenstein, The Witches, Theatre of Blood, Vampyres and The Rocky Horror Picture Show, The Oakley Court has become iconic within the world of cult film. By looking at some of the most defining ones, we can trace how they came to leave their mark on this picturesque Windsor estate, and perhaps more importantly, how Oakley came to leave its mark on them. 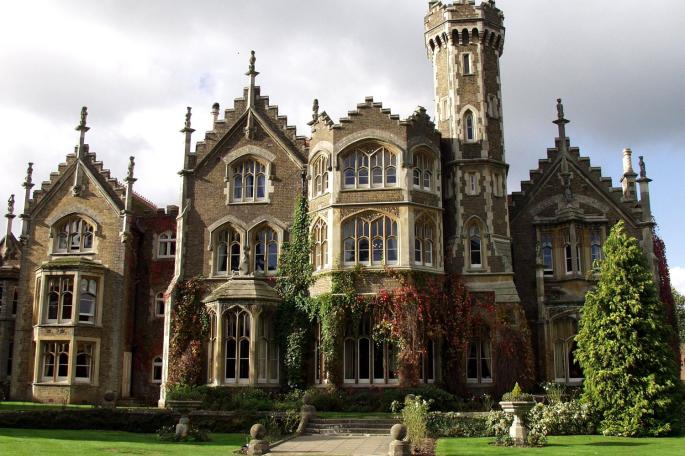 While the sixties saw Hammer's dominance at The Oakley Court, it was by no means limited to this one screen partnership. Next up for the mansion was the British Lion Film's espionage thriller The Man Who Finally Died directed by Quentin Lawrence and starring Stanley Baker and Hammer regular Peter Cushing. The film returns The Court to the film noir last seen nearly a decade earlier in the Hammer attempt The Unholy Four, and focuses around Joel Newman's (Baker) attempts to discover what has really happened to his father, a man he had assumed dead for 20 years.

The film is a key example of the influence The Oakley Court had as a filming location during this period of British cinema, regardless of the production house, genre or indeed the relevance of its supposed surroundings. More than just a building, it was an opportunity to quickly establish mood and setting, and thus arguably illustrates why it is such an integral part of British film history and would remain so long after its last owner's death just two years after this film was made.

This next film shot at The Court brought with it an actor synonymous with the horror genre, Vincent Price. Theatre of Blood saw Price giving one of his career best performances in the role of Edward Lionheart, a veteran Shakespearean actor who, when passed over for the coveted Critic's Circle award for Best Actor, takes deadly revenge on the critics who snubbed him through imaginative interpretations of Shakespeare's plays. With one of the greatest ensemble casts ever assembled for a horror film including Diana Rigg, Harry Andrews, Jack Hawkins and Arthur Lowe, Theatre of Blood is a dementedly funny and deliciously macarbe cult classic.

The Oakley Court's appearance comes roughly 24 minutes into the film as the setting for one of the critics' murders. The majority of The Court's depiction is limited to a first floor bedroom (the ever popular Room 103 available to be stayed at in the modern hotel) and the original features of the room which exist to the day are once again present and utilised. While an unsuspecting critic and his wife sleep in bed, Price and his assistant appear and dress themselves ready for a surgical procedure. Sedating the couple, Price proceeds to surgically decapitate the sleeping critic in his bed, a scene which rates highly among the film's most grotesque. The headless corpse is found the next morning by a poor unsuspecting maid and the critic's now conscious and mortified wife.

The film's use of the Long Walk in Windsor and The Court, alongside the bigger, well-known London landmarks, illustrates the enduring effect this building and its surrounding area have on the horror genre and the film industry alike.

Start your Oakley Court Collection with a Blu-ray of Theatre of Blood, available here!

1974’s Vampyres - perhaps the best known and most widely-released of all veteran cult director José Larraz’s films - sees a duo of blood hungry female vampires prowling the British countryside, from where they lure unsuspecting male motorists back to their imposing, dilapidated mansion for draining...in more ways than one. By turns terrifying, titillating, artful and scandalous, the film offers fans a unique perspective on the fascinating, highly-varied career of one of the horror genre’s most overlooked auteurs.

The star in this case is that imposing, dilapidated mansion that houses the iconic lesbian vampires Fran and Miriam, which as you may have guessed, is the grand Court itself. Effective use is made of the erstwhile Hammer horror set to bring the undead to life. Eroticism and graphic violence are interspersed with poetic dreamlike sequences, as when Fran and Miriam, after showering away the blood from their latest victim, flee to a nearby cemetery Denham Churchyard at break of dawn.

By this era of The Court's history, its association within Hammer horror and British cinema had become so ingrained that it offered an contextual resonance within a fan's framework - there was something about the imposing facade that denoted an immediate recognition and red flag for cult, as noted by Vampyres's producer Brian Smedley-Aston:

"The real star of the film is the location, (The) Oakley Court, finally utilised to the full extent and able to show off its vast potential for filming horror and generating anxiety".

This would perhaps become most evident in the fourth and final film on our list...

Start your Oakley Court Collection with Blood Hunger, a Blu-ray boxset of the films of José Larraz, available here!

The next production to be based at The Oakley Court would go on to become the most famous and talked about of them all. In late 1974, filming began at both Bray Studios and predominantly The Oakley Court on an adaptation of the musical stage play of the same name, The Rocky Horror Picture Show, written by and starring Richard O'Brien. The theme of the play and indeed the film is a humorous homage to the sci-fi and horror B movies filmed in between the late 1940s and the early '70s, playing particular attention to the style and setting of Hammer films. The plot itself loosely pays tribute to the Hammer production The Revenge of Frankenstein, starring Peter Cushing and shot at The Oakley Court itself some twenty years previously.

Virtually all the films shot using the interior of the house in the period before rely on the use of original furnishings, or minimal alterations. Rocky Horror attempts to encapsulate the juxtaposition of Frank's home with his alien origins by depicting both the classic gothic country manor environment of The Court alongside the ultra modern and sci-fi themed appearance of his laboratories, supposedly situated on the mansion's third floor.

Having been uninhabited for a decade by this point, the overground grounds and lack of maintenance to the house led to several issues during filming. Star Susan Sarandon reportedly fell ill with pneumonia and much of the shooting took place amid buckets, conveniently placed to catch the numerous drips coming down from the rotting ceiling above.

Despite these conditions - or in fact because of them - the film's set and aesthetic became an iconic feature within it. Rocky Horror went on to become one of the most successful midnight movies of all time, changing the perception of this practice and elevating the film to international cult status. Still as popular as ever, the film has grossed over $148 million at the box office and remains in limited release some 40 years after its premiere, ensnaring more fans into the fold with each passing screening and ensuring that The Court continues to hold a special place in the hearts of moviegoers for generations to come.

For more information on how to visit The Oakley Court and perform your best Frank N. Furter impressions, have a look at their website here.

For a deeper dive into The Oakley Court's history among other writings, browse Jake Roche's library on his website here.

And for an exclusive opportunity to enter a competition to win both a copy of the Larraz boxset and an all-expense paid afternoon tea trip to The Oakley Court, please have a look at SciFiNow's website here!