The Italian cinema of the ‘70s was very much based on the aesthetic artefact of beautiful women – what was your experience like, living through this era?

“I never asked myself the question of whether I was being objectified or not. I didn't have these feminist problems. Also because, frankly, nobody ever forced me to do things that I didn't want to do. Yes, there was a certain caution around some of the more ‘explicit’ scenes: the naked shower, for example, was typical in Italian films. But that voyeurism element was all very much one-sided. We were naked for the audience, but I couldn’t see them.”

Were these sets tiring?

“There were a lot of film shoots happening all the time. The critic Guglielmo Biraghi called me ‘the parsley of Italian cinema’, because, at a certain point, I was everywhere, between important roles and participations. My agent said I had to do it and so I did. Today I blame him for making me work like a donkey.”

Ah, but he didn't bother you?

But I remember being quite tired. However, we were young, so I just kept on going.

Was it difficult to combine family and work life?

“I had a very bourgeois life, with a husband who wanted me to work. He always wanted a busy woman next to him – in fact he was often the one making me work. I went on set already five months pregnant, with a big belly. Ugo Pagliai, my partner in the film, was frightened: ‘Ah, the child kicked’, and stopped shooting. I had to have a body double in the film, because obviously you couldn't see this belly.”

What brought you to Italy?

“My agent, after the first six films I had been working in Germany, told me it was time to go to Rome, to London, to Paris. He took me here to Rome and already on the second day I had a contract for Piero Schivazappa's film, The Laughing Woman. They had seen one of my German films, Andrea, and when my agents arrived to meet this producer, he said they’d already been looking for me. So it was also a stroke of luck. Then I stayed in Italy and I never stopped working here.”

What was it like working in Schivazappa's film, The Laughing Woman?

“Not easy. He was an intellectual, not an overly cheerful person. On the set he was always very busy, very busy. It didn't make the job particularly easy, especially as I hadn’t yet learned Italian at that point and had many communication difficulties. There was a very severe atmosphere on the set, I remember that well. Philippe Leroy was very much on his side, very serious, and there were no great talks between us. He remained very much on his own.”

“A great gentleman. I did one of my first films in Italy with him, A Hatchet for a Honeymoon it was called, or something like that. It later became The Red Sign of Madness. I didn't speak Italian well, so there was a very focused relationship on the need, on the job. Besides, even Bava didn't speak English. We shot the film in Italy, in a villa near Frascati.”

Remember a movie called The Forbidden Photos of a Lady Above Suspicion?

“Yes, by Luciano Ercoli. We shot it in Spain, my partner was Pier Paolo Capponi, a very serious actor, very career-driven. Luciano was a funny guy, a nice person, pleasant.”

How come you ended up working predominantly in gialli or horror movies?

“I've never really thought about it. I often think back on my career as having done a lot of Italian comedy, but what everyone remembers me for is for all the gialli, the horror films, from Mario Bava to Lucio Fulci, Fernando di Leo, Riccardo Freda, all films of terror or detective stories. Those are the films from my career that just seem to have stuck.”

What was it like working with your The Iguana with the Tongue of Fire director Riccardo Freda?

“I especially remember my co-star Valentina Cortese, she was incredible. What a charming, nice, adorable woman! When I arrived on the first day on the set, Luigi Pistilli told me: ‘You will see now what happens to you!’; "What's wrong with me?"; ‘You don't know what Valentina’s like’; ‘What do you mean?’; ‘You'll see when it happens…’

Then in the first scene Valentina and I shot together, she goes: ‘One, two, three, four, five, six, seven eight, nine, ten…’, all the way up to a hundred! That was how she counted out for her dialogue, and I had to guess at what number my dialogue entered. Counted, you understand? It was almost impossible to know where to attack. Luigi Pistilli told me he also did it in the theater. Riccardo Freda let her act like this. On Freda's set she arrived in a wheel chair. Then, quietly, she got up and took off the plaster on her leg! It was a trick - she explained - that she needed to so she could be carried while traveling by plane, to avoid getting tired and stress. This was Cortese!

Riccardo Freda was also very snobbish, very sneaky – he had this white Rolls Royce. He was someone who knew how to live his life well. With Riccardo we had actually been friends before filming started, he’d often been a visitor at our house. My husband was a former officer of the Guardia di Finanza and I remember that Freda with this Rolls had a license plate problem or something – so that was how we first met, in Rome.” 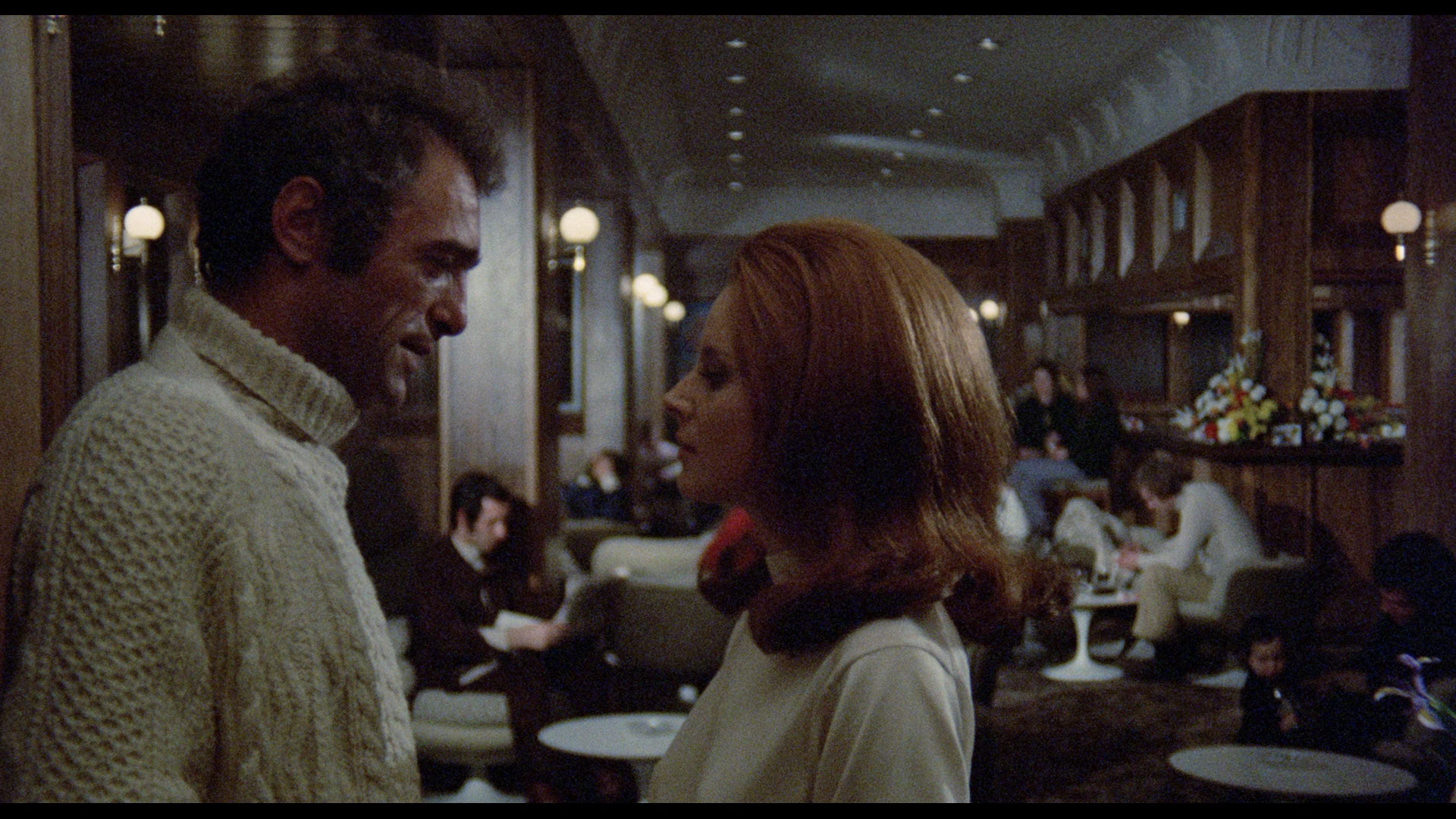 Let's talk about Fulci: it's a common rumor that he was sadistic on the set?

“Yes, he was sadistic: he had the mania that things had to be serious, true, authentic. In England he took a bucketful of worms and put them on the body of an actress. I looked at him and told him: ‘Lucio, why do you put worms on this poor thing? I do not understand…’; ‘Ah, you know, we need to keep this as real as we can - it must be so’; ‘Are you kidding me?!’”

The film was The Black Cat; do you remember anything else from the set of that one?

“The fire here in Cinecittà happened while we were filming that one. I remember starting the scene looking down this corridor wrapped in flames, and Lucio tells me, ‘Now you walk in this corridor and you go down to the bottom. Don't worry: there’ll be a wall down there at the bottom. We did everything right, the wall will then open to the outside, you get there and the wall will no longer be there. Do not worry...’

Well, I went into those flames, trying to find this wall. While not being able to breathe - the flames eat oxygen, you can't breathe, apart from the heat. And then there is a scary noise. I run in this corridor, I go to that wall that was supposed to free me…and how does it fall? On me! And yes, they were wrong. The wall had to open on the other side to allow me to go out and instead - since the gentlemen had not done things very well - it fell here. There was a fireman who hadn't trusted him, he was ready with the suit, and as he saw the danger, he jumped into the flames and pulled me to the last second out from under this wall, which was collapsing on me. If not, I would’ve definitely been crushed. Lucio was dismayed: ‘Dagmar, forgive me! Do you want a whiskey?’

But it was Piero Schivazappa on The Laughing Woman who really wanted to make me suffer. It was the same concept as Fulci: worms must be real! He attached handcuffs over my head and left me hanging for eight hours. My wrists got completely swollen. I was crying, I was crying, even after shooting I kept crying, because everything hurt. He says: ‘Yes, but this is of even greater pain to me’. These are very questionable things - do you have to make me suffer to the point that I don't understand anything anymore?”

What do you remember about that villa next to the cemetery?

“Not much except that in Boston, where we shot, I was staying in a hotel along the river and that was where Fulci took me for the first time in my life to eat in a Japanese restaurant. Lucio was nice, he was a laugh, joking, he liked conviviality. He was just so sadistic when he worked.”

What memories do you have of Werewolf?

“Not many – I remember Rino Di Silvestro, who was a gentleman; and then Howard Ross, who I have always been friends with. He was very masculine, he had this wonderful body, beautiful. But his nature was also kind - he is a very kind soul, very polite. Quite different from the violence you’d expect with macho. A very respectable person.”

© 2019 by Manlio Gomarasca. All rights reserved.

Start your gialli collection with The Iguana with the Tongue of Fire and The Forbidden Photos of a Lady Above Suspicion today!